The Magician of card one has reached beyond the grade of Magus and is nearing the Ipsissimus level of attainment. As we scale the heights of consciousness it is progressively harder to find language adequate to describe the conditions set forward in these high cards.
The post-Thelemic Mage has no fear of a christian ‘Judgement’ his heart was weighed at Death XIII and he freely occupies not just Amenti but all regions of Space and Time simultaneously.
S/He is a quantum adept, a barely human photon of electrical magick!
This card represents the terrifying freedom of the Aeon of Horus, as portrayed by the child Harpocrates (Hoor-Par-Kraat), finger raised to his lips in the ‘Sign of Silence’ and the warrior lord Ra-Hoor-Khuit. This denotes the being of this card’s ability to move back and forth along the infinite timelines of his mortal existence.
At this point in his career the Adept will cease to have much in common with the rest of humanity and retreat from public view. He knows that the earthly attainments which dazzled and thrilled him at The Devil XV are mere trinkets, he needs little in the way of comfort or nourishment for the Light of the Multiverse has permeated every cell of his aging body, (if he still has one).
S/He will use new digital media to proclaim his word and works.
His only reason for remaining trapped in decaying matter is to help others on the path and to comfort the few friends and loved ones that remain.
He is equidistant from any part of the entirety of creation, symbolized here by the arched body of the Goddess Nuit and the Holy Letter Shin (past, present, future, indeed all Trinities), represents the White Fire of boundless energy… something from nothing, which is the formula of a Creator! 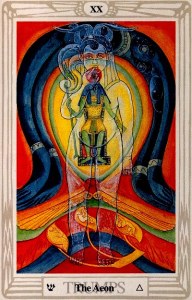